Lord Scarguts Tusk is among the world’s most infamous ogres. Gleeful to heedlessly wade into combat alongside his brothers and sisters to make pulp of his foes, he hides his true endgame within his frenzied cunning. Once victory is theirs, the Darkness will need capable and loyal rulers for the world!

In many ways, Lord Tusk is a typical ogre. He loves wading headlong into combat swinging his massive blades and making pulp of his enemies. However, Tusk is more cunning than an average ogre. Luckily, there are some brave Heroes ready and willing to stand in his way.
The Massive Darkness: Heroes & Monsters Set: Sorcerers vs. Lord Tusk adds three new heroes to your games of Massive Darkness, along with the hulking Lord Tusk roaming monster. The set also include a new class, the Sorcerer, that any hero can use. Perhaps with the help of a new artifact, the Sorcerer’s Ring, the light will triumph over the Darkness.

Not a complete game, a Massive Darkness Core Game is needed to play with this expansion.
(Although these miniatures may also be used in any fantasy or roleplaying game!) 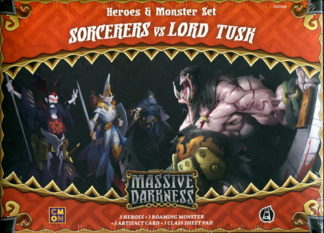