The X-Files The Boardgame

A Board Game of Paranormal Investigations and Cover-Ups.

The existence of the X-Files teeters on the brink of oblivion, and along with it the world as we know it.

In The X-Files board game players will get the chance to take on the role of Mulder, Scully, and the X-Files team as they work to uncover global conspiracies and threats while going up against various members of the Syndicate.

The X-Files board game will focus heavily on material from the first three seasons of the television series, giving fans a chance to start from the beginning of the phenomenon.

Designed for a playtime of between sixty and ninety minutes, two to five players will face off against one friend who will control the Smoking Man and his nefarious network.

IDW Games has enlisted top-notch designer, Kevin Wilson (Arkham Horror, Descent, Civilization) to bring The X-Files to the strategy board game community. Acclaimed gallery and comic book artist, menton3 (Memory Collectors, The X-Files: Season 10) brings his talents to the board gaming world by providing art direction for this project as well as the stunning box art. 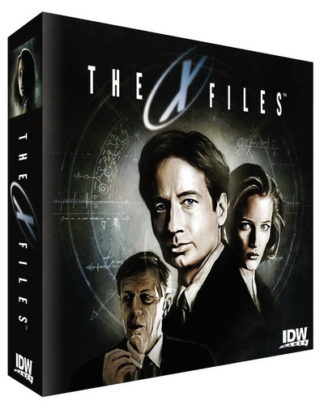 Je bekijkt nu: The X-Files The Boardgame €53,95
In winkelmand